Last week, while I was sailing on the tall ship Europa from Newfoundland to Nova Scotia, I was informed by email to remove the Ocean River Institute’s exhibit in the display window by the Mt Auburn Street Post Office in Cambridge. When I was hauling on halyards, I was directed to clear away the ducks and ocean images from the streets of Cambridge. I was up to date on monthly payments. However, after many years of occupancy, the last display window contract of eighteen months had expired during the winter. And now someone else is interested in the space and likely had agree to pay more rent per month. 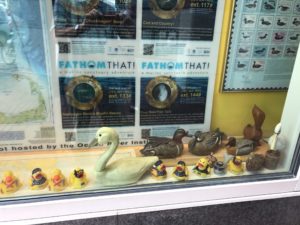 The Ocean River Institute display window is a Harvard Square amenity. Inside the post office I over hear Dads saying: “after we finish with all this, then we’ll go see the ducks.” Once I found a woman looking intently at the one of the fish sketches by Dina Chapeau. She was France and wanted to know what we called monkfish so she could order it off a menu. The irony is we were all introduced to monkfish by Julia Child, who discovered it in France. I like the monkfish served at Parsnip on Winthrop.

Watercolors by Harper Dangler illustrate three ecotones, the Atlantic Ocean, Estuary and Coldstream River. At the bottom of the ocean may be seen four habitats, muddy, sandy, gravel and boulder reef. Each ocean floor has its own inhabitants who are identified by Dina’s legend on the right.

For me the most poignant image is up high on the wall. A vibrant and clean Boston Harbor with cat boat, tug boat, tall ship and people lolling about on the harbor walk. Across the bottom of the harbor image is written: Together, we are protecting environments not for self but for all.

When we’ve got a harbor of pride with marvelous animals dwelling within, it should be displayed. Must the amenity on Mt Auburn Street by the Post Office be gone because of a lapsed contract?